Somehow this problem is occured from time to time from some reason. I’ve played WoW in Wine for few years without any issues and once that issue came unexpectedly.

The problem isn’t with addons but with cache in WoW directory. You can clean your cache everytime if you have this kind of problem, but it’s most uncomfortable to do it during raid progress etc. Problem come not from the game or some patch, but from the Wine itself! Don’t know why, but the most reasonable solution is change window mode in winecfg.

Don’t use the option for emulation!
– Emulate a virtual desktop

From now the game should work without the described problem. 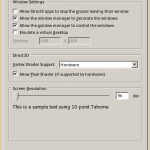